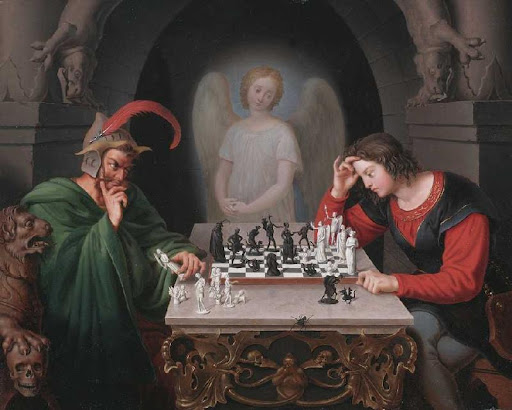 There is a famous 19th-century oil painting by Frederich August Moritz Retzsch known as “The Chess Player”, but would later be referred to as “Checkmate”. In the painting, we see a devilish man scheming and plotting while his youthful opponent is perplexed-stuck! The young man is out of moves….or is he? Years later a famous chess master, Paul Morphy, would be captivated by the painting. As he studied the work of art, he realized the young man had another move! And so do you!

“For nothing will be impossible with God.”
Luke 1:37

Wars, rumors of wars, global unrest, at times it seems as if the devil has won. Humanity stuck- “Checkmate!” Don’t you believe it? With God, we always have another move. Trust the true Master of the board to show you the way to victory. You cannot lose.