Remembering 9/11 and the Cross 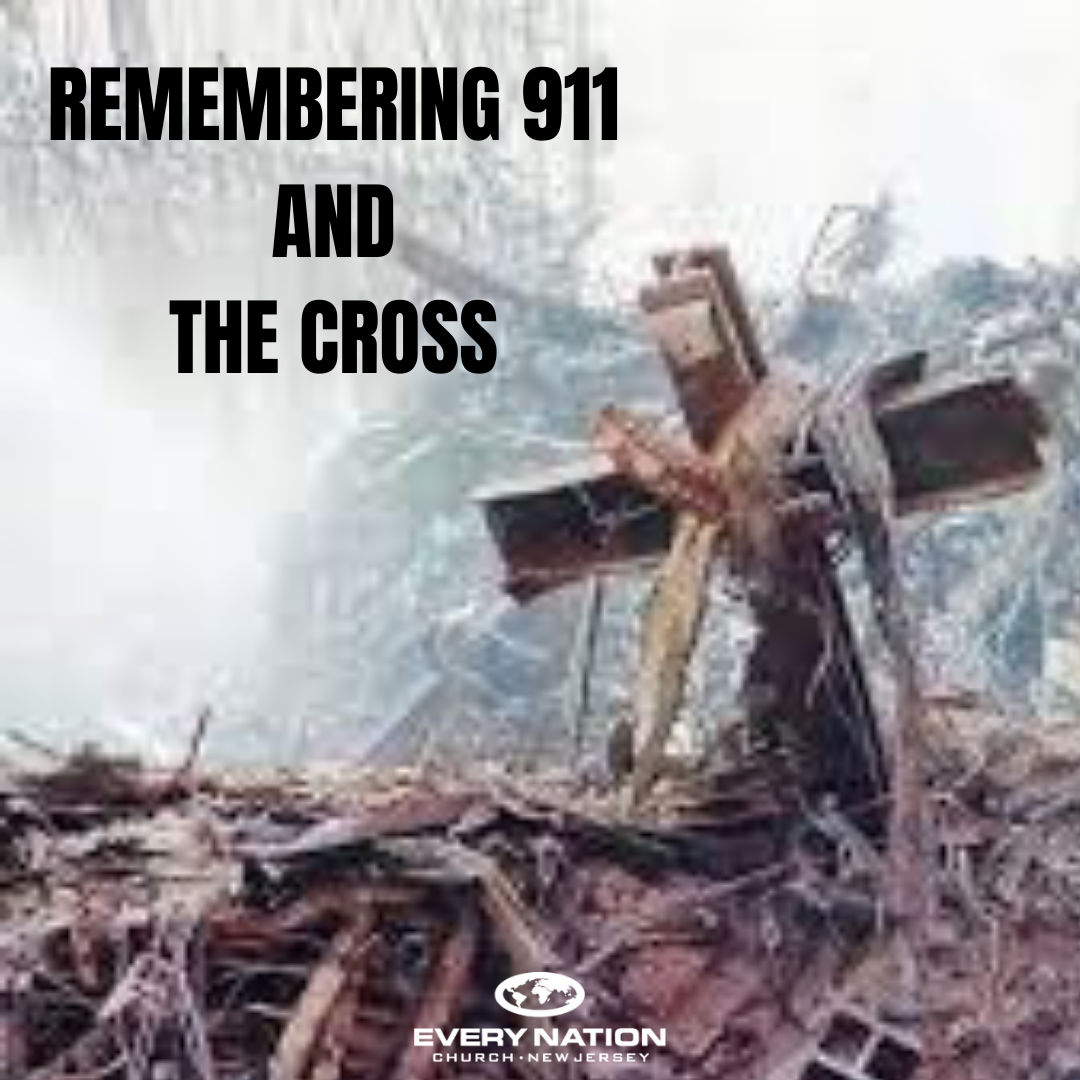 It was sometime in September of 2001, Pastor Ron Lewis received a word from the Lord as he flew out over Manhattan with the smoldering ashes of what once were the twin towers still in view, “Out of these ashes, I’ll build a great church”. You see, our story is a story of hope and restoration.  As I think back on that promise and marvel at how it’s come to pass through the simple message of the Cross.

“And I, when I came to you, brothers, did not come proclaiming to you the testimony of God with lofty speech or wisdom. For I decided to know nothing among you except Jesus Christ and him crucified.”

It is the message of the cross that reconciles us back into right relationship with God and people. Reconciliation, in turn, provides the power for true transformation to occur. Perhaps we can use both the vertical and horizontal beams of the Cross to illustrate:

(Vertical beam) The Cross reconciles us back to God:

“All this is from God, who through Christ reconciled us to himself…….”

I remember the first time I visited “Ground Zero”, there was nothing but this massive hole in the ground. The atmosphere was silent and reverent as the people remembered what once was. The human soul has a similar memory buried deep within, the faint remembrance of what once was. I would submit to you, the soul remembers what it was like to walk in right relationship with God. We were designed for a relationship with Him as it was in the Garden of Eden. Humanity, however, sinned against God, fracturing our relationship with Him leaving what many have called a ‘God-sized hole in our heart’. We feel the void and try to fill it with all types of other things: drugs, alcohol, sex, money, fame you name it. But it’s a chasm only God can fill. It’s why good times always feel like they fall a bit short, it’s why bad times feel like they shouldn’t be this way. CS Lewis says it best, “If we find ourselves with a desire that nothing in this world can satisfy, the most probable explanation is that we were made for another world.” You were made for another world, a world where God and man are reconciled, the hole in the human heart is filled. It’s, for this reason, the message of the cross is not simply necessary it’s also desirable!

If you’ve ever used the NYC subway system you know it’s never boring. There is always some type of entertainment whether you like it or not. I remember one particular day awaiting the 1train and things were oddly quiet. Trying to occupy myself while waiting, I looked down onto the dirty, garbage-laden tracks and noticed a crisp 1$ bill. I couldn’t help but think, if it were a 50$ I’d be tempted to jump down, if it were 100$ I’m going after it! How valuable are you to God that He’d jump down to earth, become a man, suffer and die on your behalf, rise again in order to reconcile you back to Himself? People are valuable to Jesus! You are valuable to Jesus! Reconciliation, while free, is not cheap. It would cost the very life of God’s Son.

I can still remember the story of Wesley Autrey, a Navy veteran and dubbed the “Subway Superman” for his heroic actions back in 2007. A young film student awaiting the 1train at 137th street had an epileptic seizure and fell onto the subway tracks. With the train quickly approaching, Autrey had the courage and presence of mind to jump down onto the tracks and to cover over the young convulsing man. The train raced into the station missing the two men by a matter of inches. This is the story of the cross, with one exception, Christ died in rescuing us. On the Cross, Christ pays the penalty for all our sins, past, present, and future. And in so doing puts us back into right relationship with God. God’s Spirit fills the hole inside our heart and the process of transformation begins.

Living in New York City for several years fundamentally changed how I live and see the world:

2) a parking spot that looks too good to be true IS!

3) to not fold your pizza is sinful

4) I’ve mastered the art of riding the subway without making eye contact with anyone!

Similarly, reconciliation brings about union with Christ that changes the way you live and see the world. Christ Spirit lives inside of you and begins to transform you from the inside out. God promises to give you a new heart.

“And I will give you a new heart, and a new spirit I will put within you. And I will remove the heart of stone from your flesh and give you a heart of flesh.”

True transformation doesn’t simply change what you do, it changes what you WANT to do. It’s a new heart. If He has your heart, your behavior will follow. A new and better way of living. It is the vertical power of the cross to transform a life.

(Horizontal beam) The Cross reconciles us to people

I still remember what I was doing on January 15, 2007, and perhaps you will too. A bunch of the Pastors and I were taking in a movie in midtown manhattan when all of a sudden our phones began lighting up with text messages from loved ones asking if we were ok and if we’d heard the news? US Airways flight 1549 departing from Laguardia airport was forced to make an emergency landing on the Hudson River. It would forever be remembered as, “The Miracle on the Hudson”. One of the passengers, Ric Elias, recalls the eerie silence as the plane’s engines were shut down mid-flight, only to have the silence broken by these words over the loudspeaker, “BRACE FOR IMPACT!”. Oftentimes in our life, priorities can become muddy, unclear- but in moments like that, suddenly what’s truly important becomes crystal clear. For Ric Elias, right relationships with people would become paramount and life-transforming. For the Christian, true transformation and life change are impossible without people, the Church. The Cross reconciles us to people and puts us into right relationships that cultivate love and true life change. We need people in our life in order to become all God has called us to be. Humanity longs for relationships. I can still remember how surprised I was to see people so lonely in one of the most crowded cities on the planet.  Psalm 68:6 says, “God sets the lonely in families……” when you are reconciled to God He places you into a spiritual family, the Church! Church literally means, ‘called out ones’- God calls you out of isolation and into family. The family of God. If you’ve ever heard churchgoers refer to one another as ‘brother’ or ‘sister’, it’s not just because we can’t always remember people’s names lol, rather, it’s reflecting a spiritual reality that we have become part of God’s family. No program, no booklet, no class has the power to shape you like the family. Think of it in natural terms, nothing has molded you and shaped you for better or worse more than your natural family. The same is true spiritually, the church becomes the means by which God transforms your life. The Apostle Paul would warn “Bad company ruins good morals.” In other words, the people you surround your life with are influencing you whether you know it or not. The same is true in a positive sense- as you surround yourself with people that passionately love Jesus and people, it will begin to impact you and change you. It’s the horizontal power of the cross.

Out of the rubble and ruins of the Twin Towers, 24 tons of scrap metal were salvaged. The metal was reshaped and reformed into what would become the USS New York, a 684-foot battleship. “Out of these ashes I’ll build a great church” from the wreckage and rubble of 9/11, Jesus reclaimed and transformed a group of people, the church into a mighty vessel used by God to transform the world one life at a time.